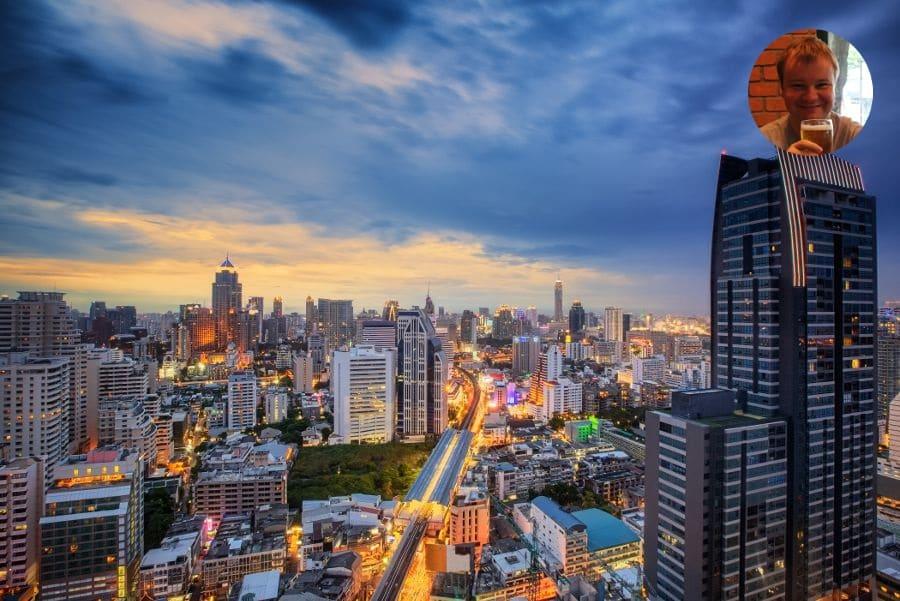 If Siam Square is the heart of Bangkok then middle Sukhumvit may be the stomach.

From award-winning classic Thai fare at Bo.lan to late night kebabs, with some of Bangkok’s best Italian restaurants, some terrific Indian options, surely by now more Japanese restaurants than there are Japanese expats, to Korean, Chinese, American, French, Mexican, Greek, Lebanese and now Argentinian cuisine – and yes, we also have Burger King. Whether it’s luxury rooftop dining at the Marriott with a panoramic view of Bangkok, or just simple, cheap and delicious street food, this part of the city has a meal for every palate and a destination for every budget.

Thirsty? Some of Bangkok’s trendiest bars are on your doorstep, with literally hundreds of imported beers to choose from, wines from around the world, and some weapons-grade cocktails. Oh, and a gin still in Ekkamai’s Park Lane. Yes, really. Numerous British and Irish pubs round off the nightlife nicely, along with international-class nightclubs in and around Thong Lor soi 10.

Plenty of international musicians have performed in the area over the years, and you’re always likely to be bumping shoulders with local celebrities – if you can recognise them. Coffee culture has well and truly arrived here too, with Ekkamai (sometimes spelled “Ekamai”) in particular boasting some seriously great independent cafes. Or Starbucks, if you like.

Sticking with culture, the area’s well served from Thong Lor’s Pridi Banomyong Institute, next to Root Garden – the farm in the middle of the city – to various art galleries, tea rooms, the theatre just over the khlong (canal), co-working spaces and yes, even a few temples for a quieter contemplative moment. Ekkamai 23’s Wat Pasi was the site of Thailand’s last public beheading back in 1919, while Wat That Thong on the north side of Ekkamai BTS is rather more serene.

Thong Lor alone (the BTS station is spelled “Thong Lo” although “Thong Lor” and “Thonglor” are also common spellings) has at least four supermarkets, with plenty of international imports available for those home comforts. There’s some serious high-end shopping in Phrom Phong’s Emporium and now EmQuartier, which also features Bangkok’s newest IMAX cinema. Rain Hill, K Village and countless other lifestyle malls offer a refuge from the hustle and bustle of it all. If relaxation is the goal, from the seriously high-end spas down to the simple traditional Thai massage shops, there’s no end of options to pamper and soothe – alongside gyms and Muay Thai schools for those looking to firm up.

For pet lovers, Sukhumvit 53 houses the more accessible of the area’s two cat cafes, where you can enjoy coffee and cakes and curl up with the resident pets, while the locals cripple the wi-fi with Instagram posts. The second is up at the business end of Sukhumvit 39, close to the Saen Saeb canal, and overlooks a dog-walking park – in an act of urban design presumably inspired by Hanna-Barbera.

Apropos of nothing, in Samitivej Sukhumvit on Sukhumvit 49 there’s one of the region’s finest hospitals close to hand, with Thong Lor 25’s smaller Camillian Hospital an affordable alternative – a non-profit founded by Catholic missionaries back in the 1950s. Other options include Bangkok Hospital on the far side of Phetchaburi Road from Thong Lor, and Sukhumvit Hospital just past BTS Ekkamai.

Well served by public transport, Thong Lor itself has the famous little red buses that shuttle passengers up and down the street for a 7 baht flat fare, then there’s the BTS Skytrain coverage all along Sukhumvit (change at Asok for the MRT), along with the oft-overlooked alternative of the Saen Saeb canal boats – easy accessible and incredibly cheap. Ekkamai bus station makes for easy access to Chonburi and beyond for the East and North-East, and for everything else there’s taxis – and Uber!

With all of the above and more realistically within either walking distance or a short cab or motorcyle ride, I can’t imagine wanting to live anywhere else in Bangkok – or indeed, anywhere else on earth.

Barry Price has been on a long layover in Bangkok since 2006, long enough to witness the rise and fall of over nine thousand sushi restaurants in Thong Lor.