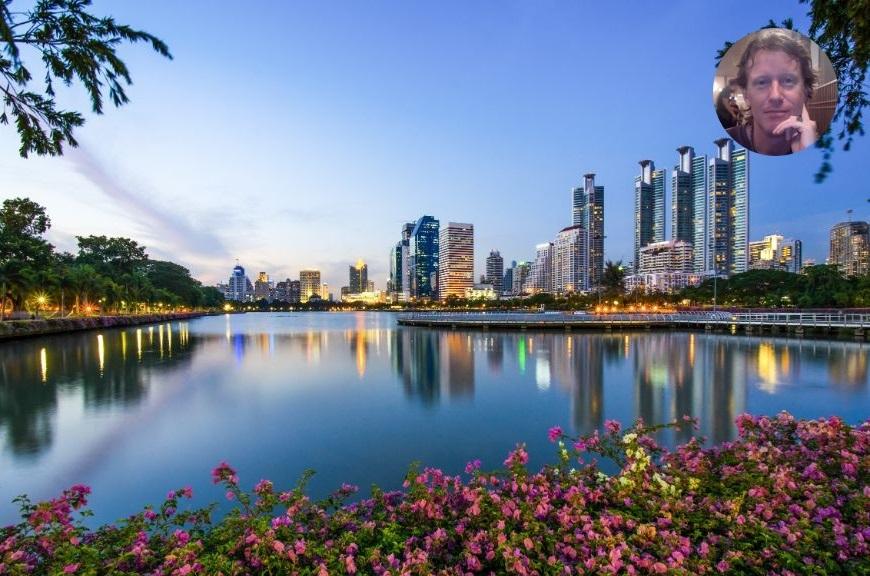 After living on the tropical island of Koh Samui for over 11 years, a job offer triggered a move back to the hustle and bustle of city life in Bangkok. Most would call me mad. But believe me, more than a decade in paradise has its limits. I couldn’t wait to move back to Bangkok – it’s inspiring, things move fast and it keeps me awake.

I’ve lived on Sukhumvit for all of my time in Bangkok. As a Creative Director, the rich vein of life that runs along Sukhumvit has the buzz that I need to feed my creative juices. Most creative work in Thailand revolves around Bangkok’s city life, and Sukhumvit is at its epicenter. It’s the oldest and best known of Bangkok’s traditional expat haunts, with all the trappings. For some that’s a massive attraction; for others a little less so.

Sukhumvit road is basically a long, relatively straight corridor – beginning at Sukhumvit soi 1 at its most westerly point, where Ploen Chit ends at the expressway flyover. In theory, it carries on for 130 kilometers down the east coast to the seaside city of Pattaya and beyond – one of the longest streets in the world – but for Bangkok expats Sukhumvit basically ends at BTS Udom Suk where Bang Na begins.

20 years ago Sukhumvit was a bustling multi-lane street washed in sunshine, with rows of middle-rise commercial buildings hugging the pavements on either side. The BTS Skytrain changed all that. Today its grey cement shadow looms down on Sukhumvit from above, cutting sunlight from all but the least-frequented corners. The street below is still as congested with taxis and motorcycles as ever but the skytrain has given residents a new nerve down the spine of Sukhumvit.

It’s fair to say the BTS stations (only 1-2 minutes apart) now dominate the scene. And none more so than in Lower Sukhumvit – defined loosely as the area around BTS Nana and BTS Asok – where most expat nitelife is still found. The 1.3 kilometer strip between these two famous stops, from Sukhumvit 1 to Sukhumvit 23 – once called the “Golden Mile” – contains more hotels, niteclubs, massage parlours, tailors, pubs and restaurants – including 2 of Bangkok’s 3 infamous redlight areas – than anywhere else in Bangkok.

Each soi (avenue) has its own distinct scene. On the north side of The Golden Mile, sois 3 and 5 have a distinctly Middle East feel, with doner kebab stalls just as popular – if not more – than traditional Thai streetfood. Some very good Indian restaurants are here too. In fact, Indian Thais own much of the property along the strip.

Soi 11 is still one of Thailand’s premier restaurant and niteclub strips despite the loss a few years ago of The Bedsupper Club, one of the world’s truly spectacular high-end niteclubs. Here you can also find Climax niteclub nestled in the basement of a large hotel – popular with late-nite owls once other venues have closed. Across the road, Limoncellos is a longstanding pizza restaurant with imported chefs and, more recently, Bangkok’s obsession with becoming the gourmet burger capital of Asia culminated in Firehouse’s creation of the “pat krapow” Thai fusion burger. Nestled in a hideaway sub-soi on Sukhumvit 11, the rustic charm of Cheap Charlies is still serving beer to full tables and, as CNN put it, has been putting “the X in expat since 1982”.

Directly under the BTS Nana station, a sprawling tent city of street vendors suffocates the pavement after every sunset. Here you can find everything from t-shirts to neoprene beer stubby holders (called “beer condoms” in Thailand!) to an array of much more confronting items.

On the other side of Sukhumvit, diagonally across the tent city, is Soi 4 – home to many of Bangkok’s prurient bars and Nana Plaza. Somehow it still survives despite never-ending predictions of its demise as land values around BTS Nana push rents to rarified levels.

One BTS stop away in Asok (often spelled “Asoke”) is the busiest intersection in Bangkok, centered around the recent Terminal 21 mall. Thankfully, the BTS walkways hang from the sky and you can easily escape the rat race below. A stone’s throw away – and perhaps even more bizarre than Nana Plaza – is Bangkok’s other redlight strip, Soi Cowboy, whose neon-drenched bars are more of a tourist attraction these days in the wake of “The Hangover 2” movie. Asok is a fast-developing area (perhaps it’s already overdeveloped?) but not far away is the beautiful green lung of Benjakiti Park, a peaceful spot for aspiring photographers and joggers. A walk around the park’s 2.2 kilometer track and you would never believe you’re in the heart of Lower Sukhumvit! See the photo above.

Lower Sukhumvit remains popular but the area is showing its age as newer, fashionable districts open a few stops up the BTS line. And this is the nub of Lower Sukhumvit’s story today. The clubs and bars have remained but the money is moving to Prom Phong and Thong Lor (Thonglor or Thong Lo) where the “twin terrors” (seemingly endless flashy 40-storey condos and luxury shopping malls) are luring the big-spenders away. Typically, The Golden Mile remains a popular crashpad for more energetic singles, and there are many excellent condos and apartments here. But longer-term expats do seem to be moving 2 or 3 BTS stops up the line, perhaps after years of hard-core partying have taken their toll!

In my first year I lived in a condo in Sukhumvit 11, where my employer owns many of the venues. At the time the soi was a joy for me, and I loved strolling through its heady mass of bars, restaurants and street vans. Everything I could wish for was just around the corner.

In my second year I moved much higher up Sukhumvit to Soi 71 (near BTS Phra Khanong) where I shared a 500 square meter home (5 huge bedrooms, en-suite bathrooms, balconies and 2 rooftop terraces!) with 4 like-minded people in design, art & production. Being much less of an expat area at the time, it was a totally different experience.

After several years in Bangkok I’ve now achieved a happy balance in my third Sukhumvit home – a shared 3-storey townhouse in a quiet sub-soi in Sukhumvit 31 near BTS Thong Lo. Lekky at 1D Property found it for us, thanks love! [You’re very welcome, dear. – Wandee (Lekky)].

So I left my tropical paradise for The Big Smoke, where my job as a Creative Director demands constant inspiration and energy. Here I have the best of both worlds – a quieter haven with our office on the ground floor, but still within a BTS stop or two of all the creative action I need. Everything is convenient, especially if you drive a motorbike. The outskirts of the city are not for me.

Steve Willeboordse is from Holland and has lived in Thailand for 14 years where he works as a Creative Director.  [Steve helped design 1D Property’s branding and I hope you agree he did a fantastic job! – Wandee]